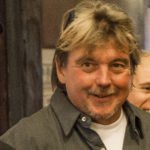 Gary works on all aspects of challenge course building/design and especially likes the building aspect, stemming from a background in the building trades focusing on custom, organic structures. His building skills combined with his passion for climbing, resulting in creative challenge course elements and designs for High 5 and its customers. “Climbing walls are one of my favorite things to build as it brings out both my love of climbing and building to create unique structures,” he says.

He began in the adventure field with Wingspeed Adventures in 2001 and then joined High 5 part-time in 2004, becoming full time in 2007. The best part of his job? “Being outside most of the time, being able to climb for a living, and most of all the people I work with,” he said. “Our mission has remained solid–to build great products and teach people how to use them, with our goal to make real change in how people view themselves, connect with others and better their lives. There are not a lot of other organizations that can boast this in a simple sense as we can.”

It’s no surprise that Gary spends his spare time hiking and climbing, having completed all 48 of the 4,000-foot peaks in New Hampshire about three years ago. He’s now setting his sights on the High Peaks of the Adirondacks. An Eagle Scout, he said he learned life skills spending most of his teenage years with the Boy Scouts. “Gary is rock solid,” says Jim Grout. “He pays attention to detail and takes pride in what he does. He’s a very creative builder.”