Lisa Hunt, Senior Trainer and Manager of Team Development, discusses the difference between real and fake jobs that we give to our participants when operating a challenge course with the desire to manage behavior.

Notes from Lisa Hunt.  This exchange happened somewhere back around 2001, and I wrote it up shortly thereafter with Ken’s input:

The question of how to engage the most number of students at a time on a challenge course is one that is often raised in workshops.  A common approach is involving people (students) in the tasks of operations to “keep them busy.”  Years ago, my co-leader during a workshop differentiated  these tasks as “real jobs” and “fake jobs,” and challenged participants to consider the implications of both on student behavior and growth, as well as program quality over all.

That co-leader is Ken Demas,  Veteran Physical Education teacher, former Project Adventure Trainer, coach, Board Chair at NYSAHPERD, Coordinator of Adventure and an Associate Prof. at Hofstra University  – an important mentor to me.  That conversation has come with me to so many subsequent workshops, and I wanted to go back to the source to hear more about Ken’s experience and thoughts.  He has generously expanded this question here:

As you may recall, one of the things I did for about 16-17 years, was to act as a consultant for NY Insurance Reciprocal.  One of the adventure cases I reviewed involved too many spotters, not too few. In an effort to involve more students at low elements, teachers would over involve students in spotting jobs.  One case in particular occurred at the rear of the “Wall”. The teacher had used it as the culminating activity for the low element portion of the adventure unit. Because the entire class was involved, the teacher had placed 6 spotters at the ladder at the rear of the Wall.  When a student started to descend, she missed the step and fell backwards. Everyone was responsible and at the same time no one was responsible. No one moved. Too crowded?? Not engaged?? Not important enough??

Too many involved and therefore not a REAL JOB.  Students need to be invested in the job. See a real need for it.  Understand that what they are doing is important to the success and safety of the individual or individuals involve.  Too many spotters diminishes the significance of what they are doing.

With this concept in mind, we fall into the same problem when we assemble a belay team.  A belayer, a back-up and when needed, an anchor should be more than adequate to manage a climber.  My least favorite bogus job is that of rope tender. I fully understand that it might look like a real job, but the kids know it is not.  Has anyone taught the rope handler how to coil the rope or flake it out so that when the climber descends it does not foul in the hands of the belayer?  Probably not. Couldn’t the back-up do this job if taught properly?

The use of the Australian Back-up Belay involve kids in Real Jobs.  The facilitator as a ropes course manager, can engage more students in a meaningful way.  Properly trained belayers can determine whether or not the need an anchor. What weight differential is needed?  How does their position, whether near or far, alter the shear on the belay system and therefore alter resistance.  Make the job more than that of a counter weight. When the manager has competently train belayers, they have the opportunity to open more activities and thus engage more students.

A good technique I used, required that student to make journal entries right after completing a climb.  Belayers were also encouraged to make entries during class.

Course design should be considered.  I mixed Australian with traditional belays.  Grigri set-up with competent kids and teams and I would belay Pamper pole events.  I was always positioned to see and control whichever elements were being used. Some folks might find this overwhelming.  But, my department at the middle school found that it worked.

Ken Demas passed away in May of 2017.  He was a “once in a lifetime” kind of mentor.  At his memorial service, I met so many people who saw him in that same light.  He is deeply missed, and his adventuresome spirit and his questions of me continue to help me grow. 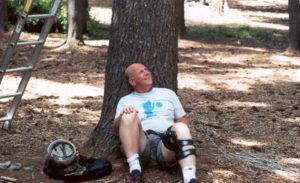