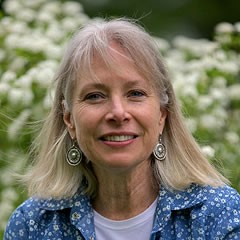 Pam Tubridy Baucom has been employed at Florentine Films, a documentary film company in Walpole, New Hampshire, since 1993. She is currently co-producer on an eight-part, sixteen-hour series on the history of country music. Previously she produced a seven-part series on the lives of Theodore, Franklin, and Eleanor Roosevelt, entitled The Roosevelts: An Intimate History. During her first sixteen years at Florentine, Pam was Ken Burns’s assistant and also helped with production work on awarding films on the Lewis and Clark expedition, the life of Mark Twain, the suffragists Elizabeth Cady Stanton and Susan B. Anthony, and the history of the National Parks. Prior to her work in film, Pam taught students with learning differences at Landmark School in Manchester-by-the-Sea, Massachusetts, and was the elementary art teacher in the Manchester public school system. Pam resides with her husband, Jim, in Walpole, New Hampshire, where they are delighted to be visited on occasion by their two adult children, Caitlin and Timothy.