Preface – A popular word every holiday season is Peace. And while World Peace may be a lofty goal, I’m reminded how achievable it is when I experience our programs each and every day throughout the year. In preparation for this newsletter, I went digging through some previously written blogs that captured themes of peace. This one from 2010 caught my attention as the message has the same relevance and power today as it did 8 years ago to transform one’s thinking about the global world and our ability to make peace happen…

I want to share a story about a program that took place at High 5 yesterday because it was one of those days that makes life and the purpose our work here at High 5 a little clearer. We had 45 high school students here from Iraq and the United States as part of our on-going program with the School for International Training. It was a spirited day as always with wonderful exchanges and moments happening between the two groups. As you can well imagine, the poignancy of having young people here from places like Baghdad, Basra and Tikrit is never far from everyone’s minds. Mix that with the energy of American young people from Ohio, Vermont and Colorado and you have a potent recipe for good things to happen. 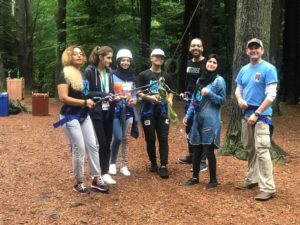 Good things did indeed happen throughout the day but at the end of the day something magical happened. The last climb of the day involved one American named Emily and one Iraqi named Amir. They were on an activity called Two Ships Passing in the Night. This involves climbing to about 35′, moving out along a cable from opposite directions toward one another and then at the mid-point working cooperatively to exchange ropes and pass one another. It is truly a high wire act requiring a high degree of trust, cooperation and faith in one another. As Emily and Amir reached their mid-point and began the difficult task of exchanging places, the crowd of onlookers below began to cheer them on. There were the typical supportive words of, “nice job and you can do it,” but then suddenly and spontaneously the crowd began to chant and clap. At first there was, Iraq…Iraq… Iraq and then USA…USA…USA.  Initially I thought they were competing chants, one for Iraq and one for the USA each coming from their respective audiences but upon closer inspection I realized the shouts of country pride and encouragement were being shared, Iraqis chanted USA and Americans chanted Iraq with equal fervor. As Amir and Emily successfully maneuvered themselves on the high wire, their shared satisfaction was reflected in the smiling and cheering faces on the ground. What a wonderful moment we all had! As they were lowered to ground one couldn’t help but think that perhaps we were all witnessing what the future of our two countries might look like in better days ahead.

Have a good day…we did,

To learn more about our work with Youth Leadership and Peacebuilding visit our website at https://high5adventure.org/case_study/sit